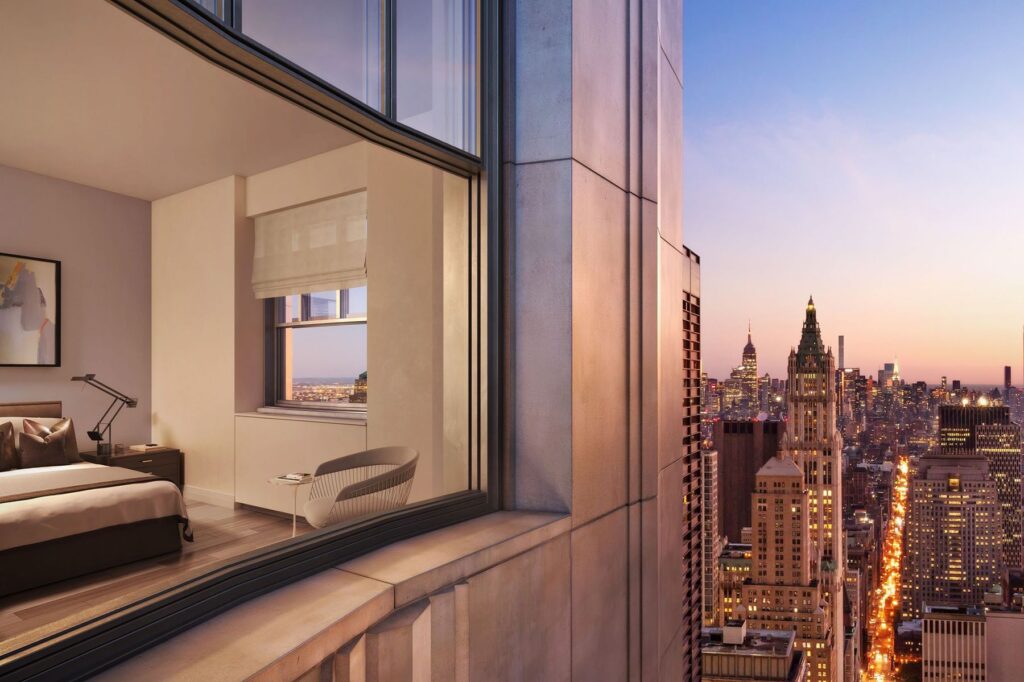 (this article, written by Oshrat Carmiel, was originally posted on Bloomberg.com)

His firm is working on New York’s largest-ever conversion of an office tower to housing, with 565 luxury units at One Wall Street, a block from the New York Stock Exchange. It’s a big sales task to handle in any era, let alone amid a global pandemic that’s tarnished the appeal of going to the office — or living in an area filled with them.

Macklowe Properties sees the area as ripe for transformation, much as the firm did almost a decade ago when embarking on 432 Park Avenue, an ultra-luxury skyscraper that helped transform a slice of Midtown into a mecca for globe-trotting investors. When complete and fully occupied, One Wall Street would add as many as 2,000 residents to the most office-centric section of the Financial District, advancing its evolution into a 24-7 neighborhood.

“This is a city within a city,” Richard Dubrow, director of marketing for Macklowe Properties, said on a walk-through of One Wall Street, occupying a full block along Broadway. “We felt that our participation and the scale of this building was kind of an inflection point for this neighborhood.”

The timing could be auspicious. The luxury revival that’s sweeping across Manhattan has been lifting the fortunes of developers in the Financial District, which has the most unsold new condos in New York City.

This year through November, buyers signed 155 contracts for newly built condos in the area, a 63% jump from the first 11 months of 2019, data from Marketproof Inc. show. The average price per square foot of those deals was $2,003, up 5.9%.

At 25 Park Row, a new luxury tower across from City Hall where a two-bedroom unit is listed at $2.8 million, 27 contracts were signed this year through November, Marketproof data show. Jolie, at 77 Greenwich St., is over 20% sold after a burst of deals this year, according to its developer, Trinity Place Holdings.

“Maybe people still want to buy new product in New York City regardless of where they’re working,” said Orest Tomaselli, a president at CondoTek who advises New York developers. “And if they’re only coming in three days week, it may be important for them to live in these nice buildings with all these amenities.”

One Wall Street has been in the works for seven years since Macklowe Properties bought the tower, a former Bank of New York Mellon Corp. headquarters, for $585 million. The firm isn’t releasing how many units have found buyers since sales started in September.

The developer is gut-renovating the landmarked property, transforming its interior into bite-sized units — largely studios and one-bedrooms — surrounded with grand public amenities including a 75-foot (23-meter) lap pool and a private restaurant.

One Wall Street accounts for 80% of all the new studio inventory in the Financial District, which could work in Macklowe’s favor if the current preference for small units holds among buyers in lower Manhattan, said Kael Goodman, founder of Marketproof. Studios at the tower start at $1 million, for 631 square feet (59 square meters) of space, according to documents filed with the state attorney general’s office.

The project includes a Whole Foods Market at its base, a luxury athletic and social club called Life Time and a yet-unnamed tenant that Dubrow described as a European department store.

The improved retail, geared toward residents’ needs over those of transient office workers, may help encourage future conversions in an area where much desk space is currently going unused, said Jonathan Miller, president of appraiser Miller Samuel Inc.

“It’s a substantial number of units that are replacing the existing commercial office tower,” Miller said. “So that’s going to redefine the neighborhood.”